This is an extremely interesting research article, not least because it gives a detailed description of the training practices of world-class athletes. Such information is generally hard to come by, so when I find some I give it my close attention!

The paper actually begins in quite unremarkable fashion, detailing what were at the time the necessary power requirements (an average 480 Watts for the four team members over 4 minutes1) to secure a world record in the track cycling Team Pursuit event, modeling the workload and physiological demands of the event, and giving an equation to estimate winning times in future competitions based on regression analysis of previous winning times.

However, for our purposes the most interesting material is the included discussion of the team's training program. Given that the event in question takes place over a distance of just 4 kilometres and thus has a high anaerobic component (with a need to maintain 100% VO2max power – well above lactate threshold – for the full duration of the race), you might imagine that the riders would focus heavily on anaerobic training, such as high-intensity intervals. In fact, there was surprisingly little of this until the final days immediately prior to the event, at the 2000 Olympic Games.

Overall, the training in the months leading up to the event was dominated by high mileage, low intensity rides (3-8 hours/day; 29,000-35,000 km/year), referred to in the article as 'basic training'. This is exactly the same as the old-fashioned base training rides employed by road racers in the off-season, done at 30-50 bpm below lactate threshold heart rate (Z2 in a 5-zone system).

This training led into periodic workload peaks in the form of one or more road stage races, which increased in frequency and difficulty as the Olympics date grew nearer, and culminated in a short period of track training to finish each of 3 macrocycles (see Figure 1; note that the darkest boxes are the track training, and that blank sections involved unstructured light training at home).

The final track training period covered the 8 days immediately prior to the Olympic Games, and the two earlier ones were just 4 days each. That's 16 days of event-specific training in 6 months! This track training was divided into 'evolution' training (6 minute blocks within 5bpm either side of lactate threshold heart rate), and event-intensity 'peak' training (1- or 2-minute blocks at maximal 4-minute power). Both evolution and peak training were performed at around 130 rpm with 20 minute breaks between repeats. As shown in Table 2, a maximum of only 7 evolution and 2 peak blocks were carried out in a given day.

The training distribution outside of the stage races and track training (i.e. 70% of the training days) was 94% below anaerobic threshold, 4% around threshold, and 2% above threshold. These numbers would change with the inclusion of the stage races, although even the tougher races would also consist predominantly of low-intensity riding, punctuated with periods where increased effort was demanded. 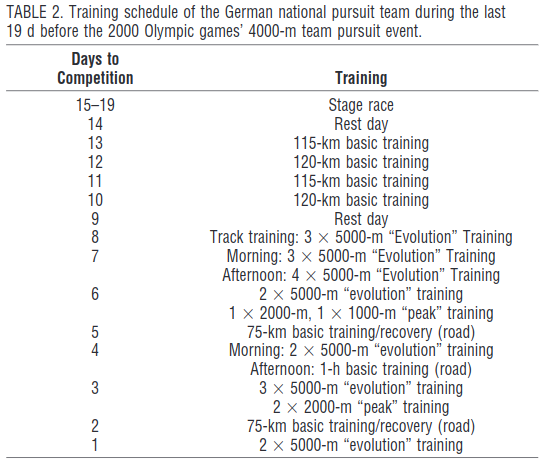 The purpose of the track training was to boost anaerobic capacity, as well as allowing focus on discipline-specific technical and motor skills. As we have seen, however, this didn't require a great deal of time to accomplish (about 8% of total training days in the six months leading up to the Olympics).

The remainder of the paper discusses in further detail specifics related to the determination and track-order of team members.

However, for us the lesson is clear (and there's a reason that base training is so named): aerobic adaptations are the major physiological determinants of performance, even in an event consisting of just 4 minutes of maximal effort. Anaerobic capacity must be added on top of this.

Because of the much more rapid recovery following low-intensity riding compared with training at threshold or higher intensities, this type of training can be repeated consecutively for many days, allowing a training volume (and associated adaptations) to be amassed that is much larger than would be possible when training at higher intensities. This is an ideal way to build a potentially huge fitness base.

Furthermore, in addition to being built upon and benefiting from aerobic adaptations, many anaerobic adaptations can develop over a much shorter time frame than aerobic ones (partly because they actually have less development potential). Understanding why this is true necessarily involves examining the specific physiological changes that we're talking about in some detail, which is a large topic that we'll look at in future, across multiple articles.

The big caveat for amateur riders when applying this to ourselves, of course, is that most of us don't have the time and resources necessary to emulate this kind of training. So we must make compromises. This also is a huge topic that I'll repeatedly address in future articles. A clue for now: if we can't match the volume, we must modify the other term of the training equation i.e., intensity. But exactly how we do this is of great importance; some ways are much better than others.

1 Note also that, prior to the Team Pursuit, two of the four riders on the team finished first and second in the Individual Pursuit event.